Select items over $250 will receive free shipping, within the contiguous United States. (Online Purchases Only)

Their meanings and uses

The 7 Chakras All Entries

Chakra is a Sanskrit word literally meaning wheel or circle, and it originates from the ancient Indian yoga system and the philosophy of Tantra. Chakras can be best described as the vortexes of energy located vertically along the spine, and they correspond to the spinal plexuses in the physical body. In your physical body, there are seven major chakras. Each chakra appears like a wheel of light that spins in a clockwise direction at a different speed. What is the spiritual importance of chakras? All of your seven chakras shape your entire spiritual anatomy. Chakras are important elements on your spiritual path, and understanding them will allow you to integrate your mind, body, and spirit in a better way. Chakras can be viewed as the seven doors to higher consciousness that will allow you to ascend and better understand your full potential. Imagine your body as a vehicle of consciousness. The chakras can be viewed as the wheels of life that can move your vehicle in the direction of enlightenment. Chakras are also known as lotuses, and each chakra symbol is portrayed with a different number of petals, which are the expression of their vibratory frequency:

Lotus is a sacred Indian flower, which can only grow in the mud and whose petals open one by one. Our chakras behave just like petals of lotus flowers: they can be opened or closed depending on the state of consciousness.

·    Chakra 1 - Root Chakra | Muladhara - Located at the base of the spine. It is associated with energy, survival, stability, comfort and safety. Its element is earth.

·     Chakra 2 - Sacral Chakra | Svadhishthana - Located in the lower abdomen. It is associated with sensuality, sexuality, pleasure, sociability and emotions. Its element is water.

·     Chakra 3 - Solar Plexus Chakra | Manipura - Located in the navel area. It is associated with strength, personality, power, determination and self-esteem. Its element is fire.

·      Chakra 4 - Heart Chakra | Anahata - Located in the middle of the chest, over the sternum. It is associated with love, acceptance, compassion and sincerity. Its element is air.

·    Chakra 5 - Throat Chakra | Vishuddha - Located in the throat area. It is associated with communication, expression, creativity and inspiration. Its element is ether / sound.

·    Chakra 6 - Third Eye Chakra | Ajna - Located in the middle of the forehead. It is associated with intuition, lucidity, meditation and trust. Its element is light.

·    Chakra 7 - Crown Chakra | Sahasrara - Located at the top of the head. It is associated with knowledge, consciousness, fulfilment and spirituality. Its element is thought.

Do you want to know the best part? The colors of the 7 chakras correspond to the seven colors of the rainbow, and they are called the spectrum of white light. Colors of the rainbow always appear in a specific order (red, orange, yellow, green, blue, indigo, and violet) when the water droplets disperse sunlight. 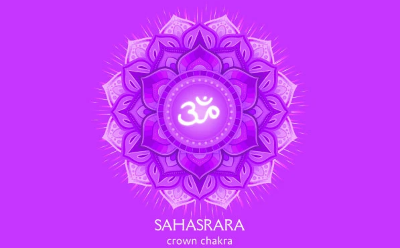 The crown chakra, or sahasrāra chakra in Sanskrit, is known as “the bridge to the cosmos.” It is the most spiritual in nature of all seven chakras. Located above the crown of the head, it acts as the individual’s center of spirit, enlightenment, wisdom, universal consciousness, and connection to higher guidance. In a sense, the crown chakra is our highest potential. It governs interaction & communication with the universe, one’s senses of inspiration & devotion, union with the higher self & the divine, and deeper understanding; simultaneously, it is responsible for a healthy spiritual life. Some people like to think of the crown chakra as a kind of umbilical cord to the divine, whereby we as human beings are connected to the oneness of all things. Because of this direct connection, it is important that we do not conceptualize ourselves as being completely separated from the divine; instead, that greater universal force is merely a larger expansion of the same energy which makes us up, too. The crown chakra allows for the experiences of unity and universal connectedness, as well as the integration of the whole. It has a masculine energy and is represented by the color violet, or sometimes white, while its symbol is a circle with one thousand petals. Elementally, it is associated with thought and silence, and its mantra is, “I know.” Use these crystals to activate your Crown Chakra: Clear Quartz, Moonstone, Amethyst, Labradorite, Howlite, Ametrine & Selenite. 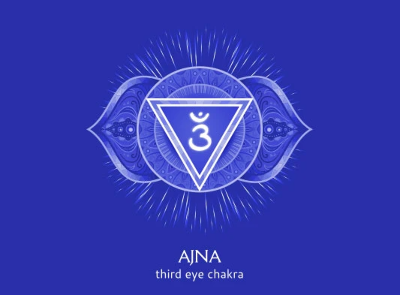 The third eye chakra, or ajna chakra in Sanskrit, is known as “the seat of intuition.” Translations of the Sanskrit name include, “perceive,” “beyond wisdom,” and “command.” Located in the center of the forehead, it acts as the individual’s center of wisdom, conscience, and higher consciousness. The third eye allows for clear thought, spiritual contemplation, and self-reflection. It is the highest chakra in the physical body, allowing it to provide visionary perspective. The third eye also helps to determine one’s reality and beliefs based on what one chooses to see in the world. The third eye chakra has a feminine energy. It is symbolized by the color indigo and an upside-down triangle and lotus flower. Elementally, it is associated with light, although some argue that the third eye is associated not with any specific element, but with everythingness. Its mantra is, “I see.” Use these crystals to activate your Third Eye Chakra: Sodalite, Lapis Lazuli, Azurite, Sapphire, Amethyst, Angelite, Celestite, Kyanite & Calcite.

The throat chakra, or vishuddha chakra in Sanskrit, is located at the center of the neck. It acts as the individual’s force of expression and individual truth, both internally and externally. A balanced throat chakra helps to set us free from the fear of judgement or need for approval from others. This chakra helps us to embrace our originality and unique individual experiences in the world. It is also associated with purity, thus connecting it to the concept of truth. The throat chakra is responsible for communication, the expression of thoughts, feelings, and ideas, a healthy internal dialogue, and striking a balance between speaking and listening, as well as the seeking and sharing of truth, social skills, and personal integrity and honor. It also works closely with the sacral chakra: while the sacral chakra governs creativity, it is the throat chakra that allows the individual to express those creative ideas, rather than stifling them for fear of others’ opinions. The throat chakra has a masculine energy and is symbolized by a blue 16-petaled flower. Elementally, it is associated with sound, and its mantra is, “I speak.” Use these crystals to activate your Throat Chakra: Turquoise, Blue Lace Agate, Aquamarine, Kyanite, Aqua Aura, Blue Apatite, Larimar, & Chryscolla. 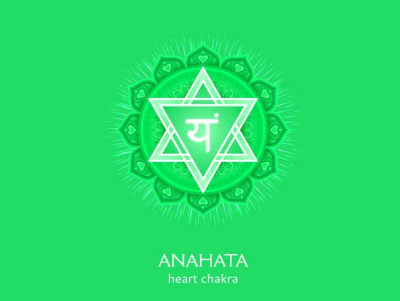 The heart chakra, or anahata chakra in Sanskrit, is located at the center of the spine at heart level. Anahata roughly translates to, “unhurt.” Accordingly, the heart chakra acts as the individual’s center of compassion, empathy, love, and forgiveness. This chakra governs one’s senses of trust, fearlessness, peace, generosity, gratitude, and connectedness, as well as change and transformation, healthy boundaries, depth in relationships with others, emotional control, and love for oneself. The heart chakra has a feminine energy and is symbolized by a green six-pointed star within a 12-petaled flower. Elementally, the heart chakra is associated with air, and its mantra is, “I love.” The heart chakra is special because it is the fourth of the seven chakras, making it the exact halfway point of the system and the unifier of the physical and spiritual chakras. By connecting the lower three chakras — the root, sacral, and solar plexus — with the upper three chakras — the throat, third eye, and crown — the heart chakra acts as the bridge between the earth and spirit. Use these crystals to activate your Heart Chakra: Rose Quartz, Rhodonite, Green Agate, Amazonite, Green Opal, Jade, Peridot, Aventurine & Chrysoprase. 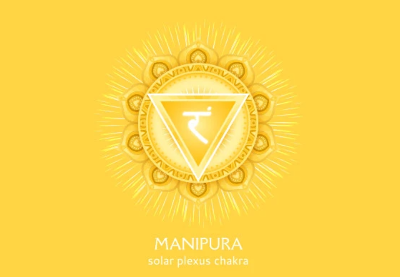 The solar plexus chakra, or Manipura in Sanskrit, translates to, “city of jewels.” Located in the upper belly at the diaphragm, it acts as the center of personal power. This chakra governs personality, ego, and identity, as well as personal freedom, choice, and authenticity. The solar plexus chakra also has much to do with motivation, willpower, and purpose, which stem from one’s sense of personal efficacy. Self-confidence and view of the self-connect to the solar plexus chakra, as well. Furthermore, this chakra governs the digestive system and its respective organs; as a result, it has jurisdiction over both the gut’s emotional brain and stored emotions. The solar plexus chakra has a masculine energy and is symbolized by the color yellow (and/or gold) and by a downward-pointing triangle within a ten-petaled flower. Elementally, the solar plexus chakra is associated with fire (as well as the sun) and its mantra is, “I can.” (Accordingly, manifestation work connects to this chakra specifically.) Use these crystals to activate your Solar Plexus Chakra: Citrine, Topaz, Fire Opal, Honey Amber, Tiger's Eye, Pyrite, Sunstone, Aragonite & Golden Labradorite. 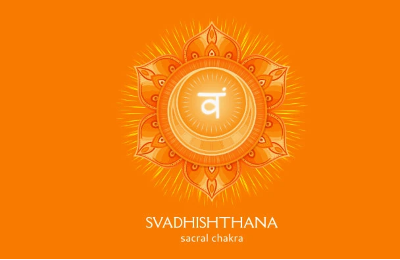 The sacral chakra, or swadisthana chakra in Sanskrit, has received the nicknames, “the social chakra,” and “the creation chakra.” Located in the center of the lower belly or, as some believe, in the genital area, it acts as the individual’s center of pleasure and passion — both sensually and creatively. This chakra governs reproductive systems and processes, sexuality, relationships, emotions, and sense of adventure. In fact, at its most broad, the sacral chakra simply governs passion and pleasure, phenomena which manifest themselves in our lives via two avenues. On one side is creativity and zeal for life — think of finding enjoyment by creating something like a piece of art, a recipe, or even a business, as well as just having fun in life. On the other side is sensuality, in the sense of embracing one’s own natural human sexuality. The sacral chakra has a feminine energy and is symbolized by a flower and crescent moon. Elementally, the sacral chakra is associated with water, and its mantra is, “I feel.” Use these crystals to activate your Sacral Chakra: Carnelian, Red Tiger's Eye, Stilbite, Citrine, Golden Topaz, Orange Calcite & Cognac Amber.

The root chakra, or mūlādhāra chakra in Sanskrit, is known as “the root of all things.” Located at the base of the spine at about tailbone-level, it acts as the individual’s center of emotional and spiritual balance, as well as instinctual consciousness. At its most basic level, the root chakra is concerned with needs. It governs one’s senses of stability, safety, strength, and commitment and is responsible for self-preservation and feeling grounded. While the root chakra is evolutionarily tied to those basic instincts that help us survive, modern day has connected this chakra more to the business of helping us thrive. Moving beyond just food, water, and shelter, the domain of the root chakra has come to include concepts like health, wealth, and community. Day-to-day feelings of trust, belonging, and being present are governed by the root chakra. The root chakra is especially important to the chakra energy system because a lack of “roots” can compromise the integrity of all the other chakras, directly affecting the wellbeing of the entire body, mind, and spirit. Only when we feel that our most essential needs are met can we focus on growing. The root chakra is also believed to be connected with Kundalini, or cosmic energy force which can be awakened and moved up the spine through the other chakras. Within the chakra system, the root chakra has a masculine energy and is symbolized by a red lotus with four petals. Elementally, it is associated with the earth, and its mantra is, “I have.” Use these crystals to activate your Root Chakra: Red Coral, Red Jasper, Black Obsidian, Bloodstone, Tourmaline, Red Carnelian, Garnet & Black Onyx.